Tennis Canada awards ATC with the Facility Excellence Award for 2017 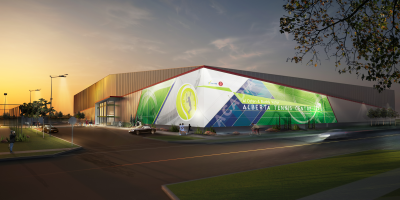 We are proud to announce that the OSTEN & VICTOR Alberta Tennis Centre was awarded the 2017 Facility Excellence Award (Facility of the Year) today in Toronto, Ontario at the Tennis Professional Association (TPA) National Conference hosted by Tennis Canada. The award was presented to Danny Da Costa (General Manager) and Charlie Mclean (Tennis Director) in front of 280 coaches and administrators from across Canada.

To be the recipient of this award after being open for only 18 months is a major accomplishment and we are humbled to be a part of the tennis clubs that were even considered.

“To be honoured as Canada’s best tennis facility is a great honour and a testament to the hard work we have accomplished to grow the game of tennis in Calgary and in Alberta, said Danny Da Costa, General Manager of the OSTEN & VICTOR Alberta Tennis Centre.  Da Costa added, “this is only the beginning we want to grow the game of tennis and would love to see tennis become the sport of choice for Calgarian youth”.